The group Arakne Mediterranea takes their name from Arakne. The name Arakne (Arachni) was the name of a young Greek princess who was transformed into a spider by the Goddess Athena (according to Ovid’s Metamorphoses, VI, vv. 1 – 145). Arakne caused herself embarrassment by winning a weaving competition against the goddess herself, so she decided to hang herself. Athena forgave her, allowed her to live and transformed her into to spider.

The Artist Company Arakne Mediterranea, created by Giorgio Di Lecce and directed by Imma Giannuzzi, performns since more than ten years, also in collaboration with the university of Lecce. Arakne had several performances around Italy and abroad, and collects enthusiastic success among music experts and people.

The company includes artist and researchers with the purpose of spreading the old traditions and culture of the tarantella, dance, but also to renew and give new life to the old music trough modern elaborations of the ancient rithms, with possible contamination with other music styles and cultures.

The musical repertoire of the Company is thus rich in traditional components drawn from original sources, reflecting cultures and ethnics variously influenced by the course of the centuries and inserts above all from the GreeK and Oriental music world, as well as from Northern Africa. Giorgio Di Lecce and his group Arakne have chosen to Keep as close as possible to the repertory passed along by oral tradition, respecting the living memories of their grandmothers, who were percussionists, folk singers, dancers, and passed their love for the pizzica and folk songs to future generation.

The “tarantella” is an italian folk dance, characterised by fast vivacious steps and lively 6/8 rhythm, often accompanied by tambourines.
The origin of the “tarantella” is connected to the “tarantism” a sort of hysteria which appeared in Italy between the 15th  and 17th  century and is connected in some obscure ways to the bite of the tarantula – the victims were able to cure themselves by ecstatic dancing.
The poisonous tarantula was known in Italy as early as the 10th  century. But even more dangerous was the Latrodectus (or black Widow spider), the venom of which could bring death. Both these spiders still inhabit the Italian peninsula and the Mediterranean coast today.
As some cases of spider bites had been cured with music and dancing, this then became a practise in the whole of Southern Italy. Starting from the 14th century, this Kind of dance was hence considered as being therapeutical, capable of healing the affects of the hypothetical (or real) venom from tarantula. Atarantata (a woman bitten by a spider – men seem to have been less affected ) would stimulated by a particular  drum rhythms, by certain  sounds and colours and after days of dancing be healed from the poison.


These individuals (mostly women) pretend to have been bitten by some animal living in the area of Taranto (whence they take their denomination) and fallen victim to an ainlment which makes them crazy. They stagger and bang their heads and their knees tremble. Often they sing to the sound of music and dance, frantically move their lips, make their teeth screech and behave like fools. They don’t ask for a thing, but someone accompanies them, notifying everybody that are “taranted”, collecting alms for them all…

Later these dances and music that originally came from Taranto, took on the name of tarantella (tarantella).

According to German naturalist W. Katner (1956) dancing epidemics began to manifest themselves from the 17th century in the from popular feast. Musicians and participants came from different villages with women the main dancers. These activities which included reckless dances were considered unacceptable by the Church and were basically forbidden. In spite of this, these rituals, which had deep roots among the population, practised through the Middle Ages and later became the popular tarantella dances at local celabrations.

Today only three dance forms survive of the Tarante of long ago:

1) The Pizzica - Taranta originates from the rithm played for patients suffering because of the tarantula bites. It is perfomed during the Galatina pilgrimage (Galatina is a small town near Lecce); this pilgrimage happens on june 29 of each year;

2) The Pizzica - pizzica (dance of joy) is performed at local celebrations, weddings and similar occasions;

3)The Pizzica - scherma (Knife dance) is performed on August 15th , during the Saint Rocco celebration, in a village Torre Paduli near Ruffano (Lecce)

Based on information by Giorgio Di Lecce 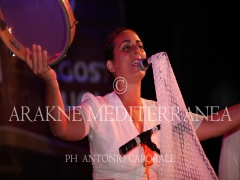 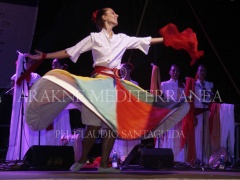 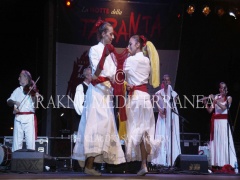 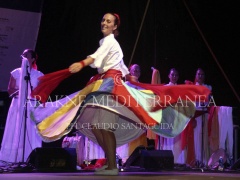 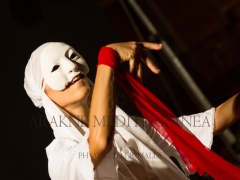 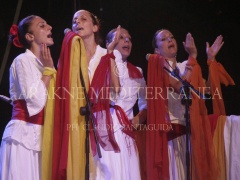 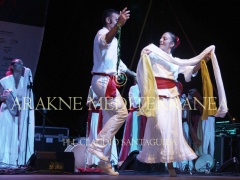 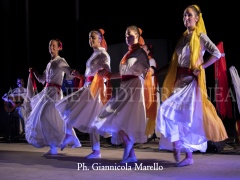 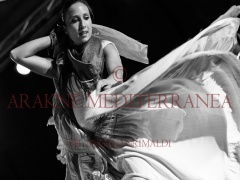 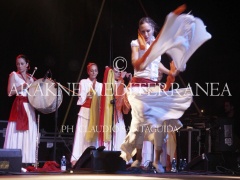